Greetings, Schneckens!
No, not season greetings; we're getting pretty close to February - the holiday season is over. So anyone who still has those Christmas trees up, seriously, take it down! As I wrote that, my face actually made the expression that it would if I was speaking to you directly in person. Weird.

I had an appointment with a doctor today because my ears are a tad crazy at the moment, as I've mentioned previously, so hopefully with the medication, everything will be fine. Or close to fine as humanly possible. So that was my day really. I also watched Boyhood and I'll talk about that tomorrow because my goodness...the feels.

Let's do a 'Types of'' today because I haven't done one in a while. Yesterday I changed my Facebook profile picture and it became my most liked one ever and received so many compliments - everything I always dreamed of. But here's the bittersweet catch - I had loads of makeup on and the picture had a filter. People seemed to appreciate a somewhat fake representation of me, other than my usual natural self. Oh the woes. Yeah, some friends always think I look good, that's not the woeful bit - it was the new 'likers', who only paid attention to me when I supposedly look good. Eurgh. I can rock a natural picture.. I won't deny though that the picture was hot, check it out for yourself:

Moving on somewhat, let's check out the types of profile pictures you may come across when you.. well, come across one. It's getting late, don't judge me.

The Avatar ~ Person hasn't uploaded one yet or wants to say 'FU, society' and decides that a picture isn't necessary or just wants to respect their privacy (kinda going against the point though..)

The Smouldering Prince ~ That young adult type male person, or teenage boy as they're commonly referred to, who watched a lot of Johnny Depp/Ryan Gosling movies and noticed a pattern between the amount of times he smouldered towards the camera and how many women's underwear fell to the floor, then attempted the same look to hopefully get the same response. Most of the time it doesn't. 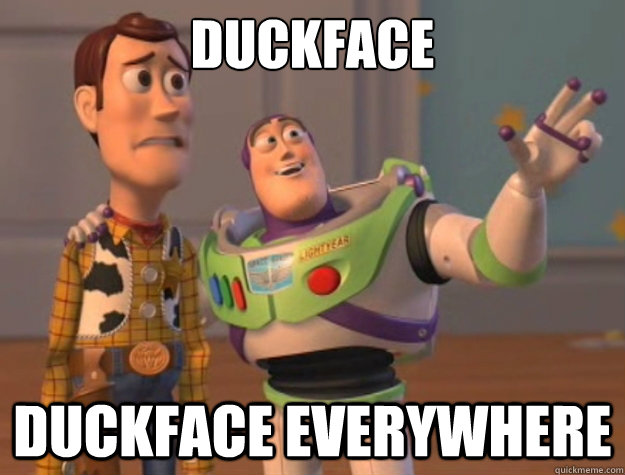 The Pouting Princess ~ When a female, usually young and somewhat eager to impress, holds a camera phone a certain angle, with the right lighting, then pouts like they just saw Mila Kunis walk past and the hair envy was off the scale. It's a subtle look and a sure fire win.

The Duck Face ~ When pouting turns into 'holy shit, did you just eat a ton of bitter lemons?! What happened to your face?! Sheeeeeeit!'

The Siamese Twins ~ Those pictures where the individual isn't on their own and is usually with their 'bestie' or something. Some times the purpose of this is to make themselves seem more attractive or to enhance some trait in them.

The Overly Affectionate Couple ~ There is always a couple that seem to lose their identity when they start dating and feel the need to be in the same profile picture for the whole world to see that yes, they are in fact a couple. The moment it's changed, you know they've hit a rough patch. Yikes!

The Filter King/Queen ~ Pictures that are so overly/obviously edited that when you see them in real life, it's like 'oh, that's what you look like!' People, a little bit of filtering is reasonable, but come on, if you feel the need to edit it that much, why are you even using it in the first place?

Aaaaaaaand finally, The Miscellaneous ~ Those pictures that range from animals to their favourite [anime] character. Usually the typical nerds that just gave into the new social norms of social networking, but didn't want to use their face; probably to save their shame for joining the system.

There you go! So many options, but which are you?! Have fun working that out whilst I Google beetroot recipes!